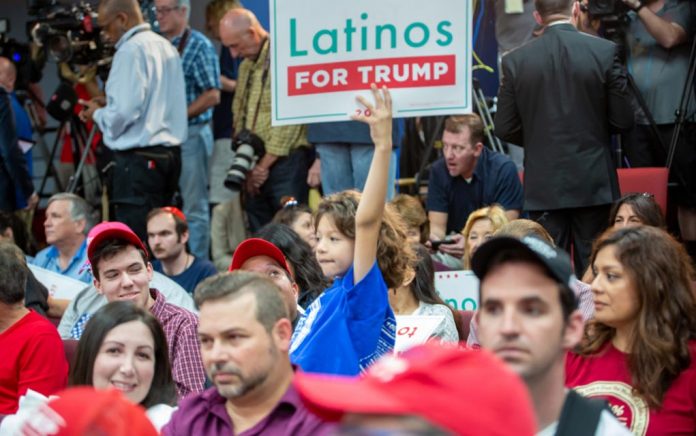 (ConservativeStar.com) – Over the last few months, President Trump’s rising support among Black Americans has received a lot of attention. However, a new survey shows the president is also gaining support among Hispanic voters as well. In 2016, Trump secured just 28% of the Latino vote. However, a new Quinnipiac University poll shows him currently at 36%.

The poll shows him leading in Florida among Hispanics, as well.

Trump leading FL Hispanic likely voters 45%-43%, per @QuinnipiacPoll. Small sample, etc. but that would be a big change from ‘16, when Clinton pretty clearly won FL Hispanics by double digits.

In a new Hill-HarrisX poll conducted from August 22-25, 24% of registered black voters said they approved of Trump’s job performance. When considering the results from Quinnipiac University, these numbers are enough to swing the election to Trump in battleground states if they hold up.

Republicans are crediting Trump with his handling of the economy for the increase in Hispanic support. However, the president and his campaign have made great efforts to reach out to this community since the 2016 election. Some Democrats are openly expressing concern that Biden has not been as aggressive as he should in the Latino community and that the former vice president could be taking them for granted.

Trump’s campaign believes it’s outworking Biden’s among Hispanics and betting it’s going to pay off on election night. Their efforts could also force the former VP to spend money on another targeted group that Democrats believed they secured long ago.

Perhaps Biden was on to something a few weeks ago when he created a firestorm for suggesting Hispanics were highly diverse, unlike blacks? It was a foolish statement by any standard. However, he may have been tipping his hat on some internal campaign knowledge that the media doesn’t have?

The election is only two months away. We’ll find out soon enough.