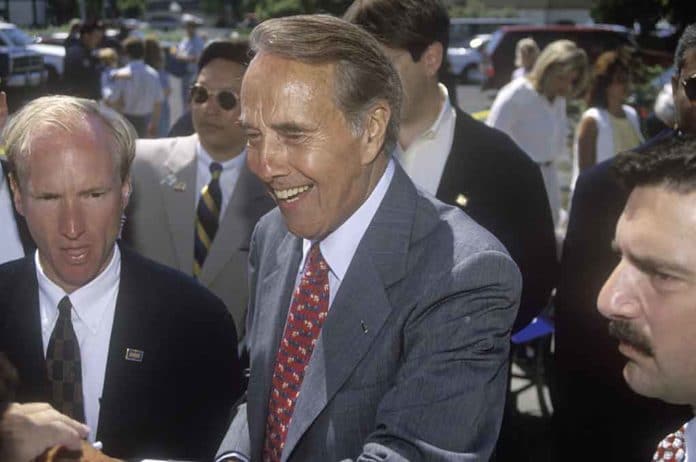 (ConservativeStar.com) – Robert Joseph “Bob” Dole was born July 22, 1923, in Russell, Kansas, and passed away in his sleep on December 5, 2021, at the age of 98. He was a legitimate war hero and represented his home state in the US Senate from 1969 to 1996 when he left office to run for president as the Republican Party’s candidate against incumbent Democrat Bill Clinton.

“His is the most American of stories.”

Bob Dole served in the US Army in Europe in World War II, where he was grievously wounded trying to rescue an injured comrade on April 14, 1945 (less than one month before the official end of hostilities there on May 8, 1945). Flying metal tore apart his right shoulder and arm, and damaged vertebrae in his neck and spine, leaving him paralyzed. While he eventually regained the ability to walk, he never did get the use of his right hand back.

After decades in politics — he was first elected to the House of Representatives in 1951 — Bob Dole became a well-known public persona that left him as fair game as a target of the political Left. He was regularly drawn into stories by Matt Groening on The Simpsons, and the late comedian Norm Macdonald often portrayed him on NBC’s Saturday Night Live (SNL).

Senator Dole could have taken offense at the barbs, instead, he took it all in stride and actually poked fun at himself when he appeared on SNL just a few days after he lost the election to President Clinton. During the show’s cold open while talking to MacDonald, he referenced an incident during the campaign where he’d fallen off of the stage, telling the comedian “thanks for noticing… I appreciated it.”

Rest in Peace, Senator. Our condolences go out to his family and friends.