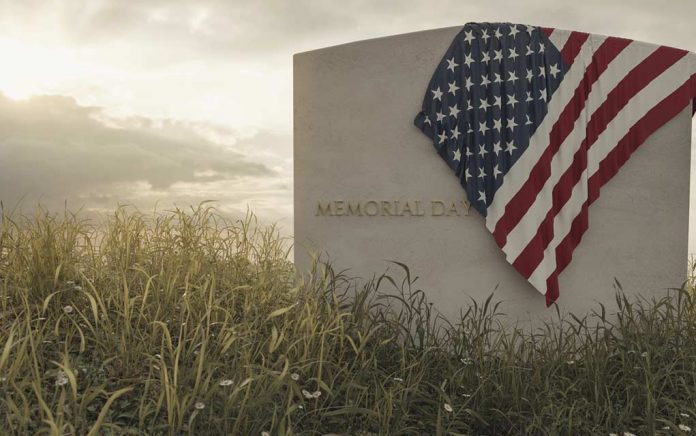 I will be lowering the flags on all Federal Buildings and National Monuments to half-staff over the next three days in memory of the Americans we have lost to the CoronaVirus….

The president then replied to his own Tweet, reassuring Americans that on Memorial Day Monday, the flag would be flown at half-staff in order to honor American veterans who had fallen in service to our country. The flag will be at half-staff over all federal buildings and monuments. And though he did not insist Americans follow suit, it’s the normal course of action for those who fly the American flag to display it in whatever manner the president does.

….On Monday, the flags will be at half-staff in honor of the men and women in our Military who have made the Ultimate Sacrifice for our Nation.

Flying the flag at half-staff on Memorial Day is a normal course of action while taking the extra step to honor COVID-19 victims is not. Yet, the president has long said we are at war with a “silent enemy.” It seems fitting then, that these victims who have fallen during this time receive the honor of a half-mast flag during the Memorial Day weekend.

Not all deaths during the pandemic are a direct result of catching the virus. If we are at war with a silent enemy, and COVID deaths are a portion of the results of that war, then so are the deaths that came as a result of actions taken. One study, conducted by the Meadows Mental Health Policy Institute, suggests that suicide rates can be expected to increase by 1.6% for every 1 percentage point increase in unemployment rates. That rate doesn’t account for those who commit suicide because of losing a loved one or overwhelming depression and loneliness that is the result of being locked down at home.

With these sorts of numbers, it’s hard to imagine why states won’t open up and allow people to get back to work. And it’s important to keep in mind that while the president is working every day to battle various fronts, including the virus, he did not close businesses. The governors of the states did, and it’s up to them to prevent more deaths by opening the states and letting Americans get back to work.

First Printing of the US Constitution Sells at Auction

Bill Gates Influence Operation Is Bigger Than Anyone Realized

Kamala Harris Tries to Throw Trump Under the Bus

Coalition Wants Women to Register for the Draft

Wyoming GOP to Stop Recognizing Liz Cheney As a Republican

Americans Warned to Leave Ethiopia As Civil War Heats Up