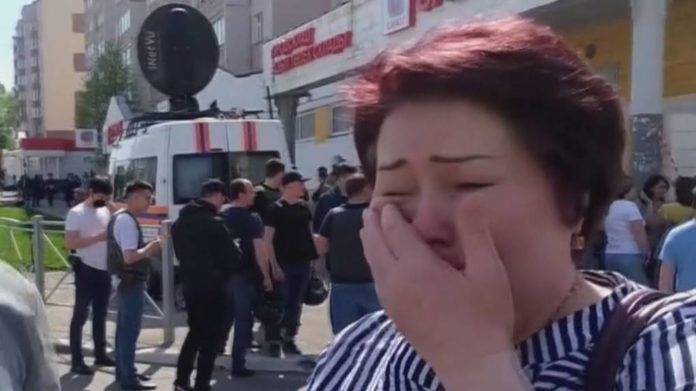 A gunman wearing Nazi symbols opened fire at a school in the western Russian city of Izhevsk, killing at least 11 children and injuring 24, including 22 children.

Russian officials named the shooter as Artem Kazantsev, an alumnus of the school where the shooting took place. Investigators are searching Kazantsev’s residence and probing reports of his “neo-fascist views and Nazi ideology”.

Kazantsev entered School No. 88 armed with two traumatic pistols, which were converted to fire live ammunition. There are several images of the shooter, dressed in black with a hunting rifle, walking outside on the street and then going into the school and committing this horrific act.

The shooter, a 19 year old former student from el Naz Galiev, posted on social media that he believed he was a god and started to hate everyone. The governor of Udmurtia said the gunman killed himself after the attack, and investigators are looking into his neo-fascist views and Nazi ideology.

This is at least the third school shooting in Russia or territory controlled by the country in the past two years. Putin called for new gun control measures in June 2021.

In the aftermath of the 2018 school shooting in Parkland, Florida, Russia saw three school attacks by teenage perpetrators using air guns and knives.

Izhevsk is home to more than 600,000 people and is a prominent industrial center. It is best known as the home of the AK-47 rifle.