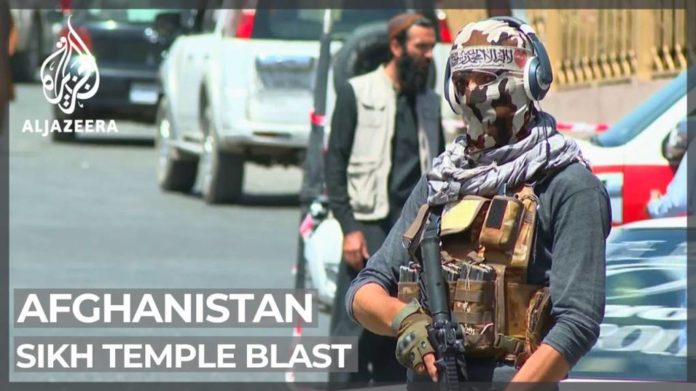 Seven gunmen attacked a Sikh temple in Afghanistan’s capital Kabul on Saturday, killing at least two people. A member of the security forces and a Sikh worshiper were killed in the attack, according to state-run news agency Bakhtar.

One Sikh was killed and seven others were wounded in the attack, and a Taliban security force member was also killed.

A vehicle full of explosives was also detonated outside of the temple, but no casualties were reported from the explosion.

Footage posted on social media showed the temple’s main prayer hall destroyed by the attack, and nearby streets littered with shattered glass. Taliban forces cordoned off the neighborhood, preventing journalists from speaking to residents or witnesses.

No group has claimed responsibility for the attack, which came days after an Indian delegation visited Kabul to discuss humanitarian aid.

In March 2020, a lone Islamic State gunman attacked a Sikh temple in Kabul, killing 25 worshippers and wounding eight others. Several families have since left Afghanistan, but many others cannot financially afford to move.

The Taliban and Islamic State are bitter rivals, with the former wanting an Afghanistan free of foreign forces, the latter a caliphate.

The UN Assistance Mission in Afghanistan condemned the attack on the Gurudwara, and the European Union Ambassador to Afghanistan said religious pluralism needed to be protected.