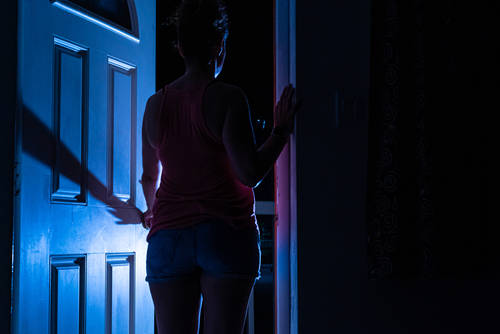 Police found the dismembered body of a woman in two suitcases in an East New York apartment on the corner of Linwood and Atlantic Building. They are looking to speak with the victim’s boyfriend.

Investigators believe a 22-year-old woman’s body was found stuffed into two suitcases in an apartment in Cypress Hills, Brooklyn. The body was found in a bloody bathroom and a meat cleaver was also found in the apartment.

Friends say the victim was a sweet and humble person, but her boyfriend violated the act of protection in the past showing up at her apartment unannounced. Neighbors said they heard fighting two weeks ago and expressed shock and disbelief over the gruesome discovery.

Security guards tried to check on the woman in her Cypress Hills apartment on Wednesday but were refused entry by her boyfriend and another man.

The sources said the 23-year-old boyfriend had been at the woman’s apartment in March to “get his stuff,” but the victim’s friend said she repeatedly told cops everything was okay when officers showed up.

The victim had been working with Housing Plus, a nonprofit program that helps women flee their abusers, but she hid her boyfriend inside her house when cops were called.

For additional insight on this tragic case of gruesome homicide, please consider the news outlets listed below to stay in the know.