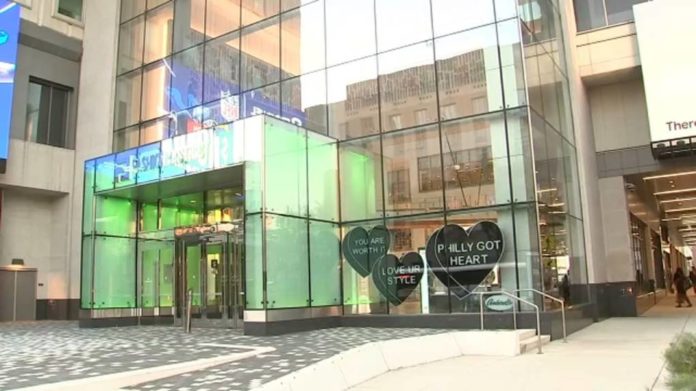 A gunman shot at two men entering the Fashion District mall in Center City, but missed and hit a granite wall. A shopper sustained a scratch, but detectives believe the damage could have been much worse. The only person that was injured suffered a minor cut from a piece of granite that flew off the wall after it was hit by a bullet.

The shooter entered the crowded mall through the 9th Street door with another male and shot at two men who entered through the Market Street doors. The bullet missed and hit a granite wall.

Desiree Morales was on the first floor at the time of the incident and heard two loud bangs. Security guard William Beard called the incident a nerve-racking situation.

Mall workers fear incidents like these are becoming routine. On September 3, more than 100 juveniles stormed the mall causing mass disruptions.

Police said five people were arrested in the incident, and it’s still unclear what led to the gunfire. Some believe increased police presence in the Fashion District is only part of what it takes to address the overall issue of gun violence.

Police say they took an 18 year old suspect into custody after a shooting at the Fashion District. They’ve increased police presence in the area since the last incident, and will be stationed there Friday to Sunday.

To learn more about this shooting, please consider the news outlets listed below.