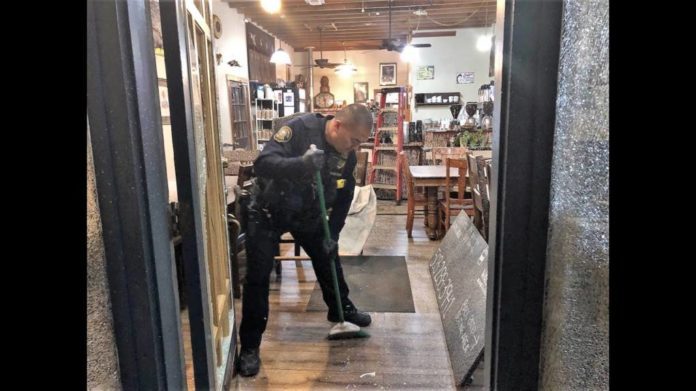 Six masked vandals smashed up a coffee shop about 3 a.m. Wednesday in apparent retaliation for a planned “Coffee with a Cop” event that had drawn angry online comments, according to the proprietor.

The vandals showed up bearing hammers and crowbars and misted the store’s interior, damaging Native American art and the authentic stuffed bison head.

Portland Police Bureau spokesperson Sgt. Kevin Allen said responding officers assisted with the cleanup and the bureau would respect her decision if she decided against hosting the event that caused this kind of controversy.

Footage of the aftermath of the vandalism can be seen below:

“I was just hoping people from the community could bring their concerns, their questions” pic.twitter.com/r9PxueIdgn

Loretta Guzman, owner of the coffee shop, was in disbelief when she got the news that her business had been broken into. She cannot help but wonder if she was intentionally targeted because of the Coffee with a Cop event she planned to host Wednesday morning.

Guzman says people were gathering outside her coffee shop to ask what happened. She said she needed to clean paint off the walls, the counter, the floor, and the bison that she had mounted on the wall.

Guzman went ahead with the coffee shop event as planned, but the front windows were broken and a fire hydrant was used to spray the furniture, walls and original Native artwork.

For additional information on this story, check out the news outlets listed below to stay in the know.