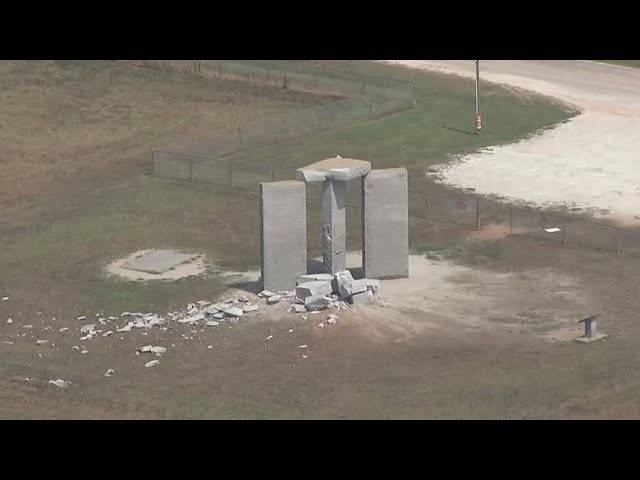 An explosion rocked a tourist attraction in Georgia on Wednesday, destroying a large portion of the granite structure. This lead to a police investigation on the incident.

A pillar of the monument was reduced to rubble Wednesday, sparking conspiracy theories.

A far-right GOP candidate had described the structure as Satanic and vowed to destroy it. Kandiss Taylor ran for governor on a platform of “Jesus, guns, and babies” and promised to demolish the monument if elected.

Georgia Bureau of Investigation agents found evidence of an explosion at the scene, and the Georgia Department of Transportation closed down roads in the area.

The Georgia Guidestones, sometimes referred to as “American Stonehenge”, are inscribed with 10 guidelines in eight modern languages and four ancient scripts. They have been the focus of conspiracy theories since 1979, when a man named Robert C. Christian commissioned Elberton Granite Finishing to install it.

A pastor asked the county board to remove the Guidestones, saying it’s a religious monument and its inscriptions support genocide, the killing of 6.5 billion people, and abortion and Planned Parenthood. The county attorney said the monument is simply a tourist attraction.

The Georgia Guidestones monument in Elberton has become increasingly controversial on social media as well.

The remains of the monument were destroyed for safety purposes. A backhoe pushed down the structures, and now all that’s left is a mangled pile of rubble.

The Gbi cannot confirm if a video claiming this was caused by a lightning strike is real.

For more information on this story, check out the following news outlets listed below.