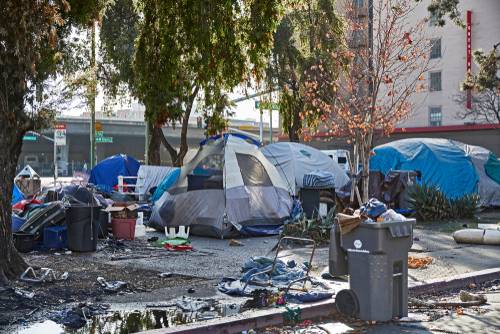 Arizona police discovered a dead and burned fetus at a homeless encampment on Saturday at 1 am. The fetus was only about 20 to 24 weeks old.

A couple found the unborn baby’s remains in Phoenix’s largest homeless encampment while attempting to put out a fire. The couple called 911 in an attempt to call for help after they saw the fetus’s head, arms, hands, legs, and chest.

A man whose house overlooks the encampment claims that he wasn’t completely shocked by the discovery, despite how gruesome and heart-wrenching the circumstance was.

One witness told a neighbor that he and his fiancé saw someone light a fire in the street, and then went to put it out when they saw the tiny body. The fetus was pronounced dead at the scene.

Police officers say they found the unborn child’s remains in the middle of a Phoenix street, just west of downtown. The cause of death will be determined by the medical examiner’s office.

Audio clips from the couple’s 911 call and snapshots of the condition of the homeless tent town can be seen in the video below:

There remains a crippling problem of homelessness on Phoenix’s streets. Thousands of people were reported homeless in Phoenix during the pandemic in 2020, and the recent homeless count was 3,096, according to city officials.

During the 2020 pandemic, 3,096 people were left homeless in Phoenix, with feces and garbage scattered throughout ‘The Zone’. The conditions are brutal and dangerously unsanitary for anyone that is residing there.

Phoenix officials plan to spend $50 million on homeless services, including $27.9 million on a new shelter and 175 new beds at the Central Arizona Shelter Services. Hopefully, with these accommodations, drastic crimes and deadly incidents will be much less common.