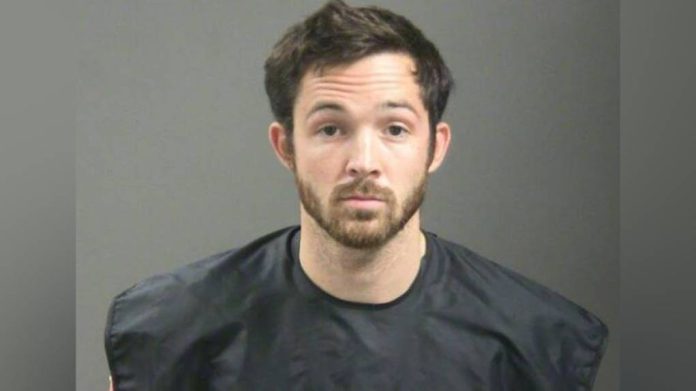 A college-aged woman a strange man in her bed at her home in Fayetteville, Arkansas, on Sunday. Police received a call from the woman, who claimed the man smelt of alcohol and was uncoordinated. These signs were considered to be obvious indications of drunkenness.

John R. Tyson, a great-grandson of Tyson Foods’ founder, was arrested after falling asleep in the wrong house at 2 am. He was arrested on charges of criminal trespass and public intoxication after being found not invited to stay at the home.

Tyson, 32, was warned by the cops to get up and put his clothes on or go to jail. The police footage shows him appearing disoriented and attempting to go back to sleep. When Tyson failed to comply with police orders, they pulled the sheets back and placed him in handcuffs.

Tyson made no further statements to the officers explaining his actions during his arrest. The officer found Tyson’s clothes on the floor and identified him by an ID in his wallet.

John Tyson was promoted to executive vice president and chief financial officer, otherwise known as the company’s CFO, in 2019. He apologized to colleagues for his behavior, saying it was ‘inconsistent with his personal values’ and ‘the high expectations we hold for each other’.

Tyson Foods has announced a three-member governance committee will lead a review into the incident, though corporate governance experts are calling for an independent investigation.

However, there is not a consensus of agreement on the decision to go through with this internal investigation. Experts said Tyson Foods should hire an external firm to review John R. Tyson’s connections to the company because a review by the board would be seen as a conflict of interest.

John R. Tyson is due to appear in court Dec. 1 to answer for his criminal offenses against the female resident of the home he broken into. He is now getting counselling for alcohol abuse.