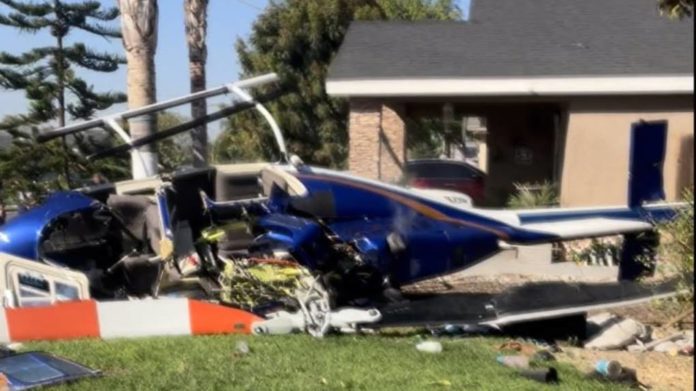 A helicopter spun out of control and crashed in the front yard of a home in central California, hurting a pilot and passenger. The National Transportation Safety Board was investigating the incident further to get additional insight on how the dangerous crash came about.

The helicopter nearly crashed into a home Saturday morning in southeast Fresno, sending two people to the hospital. The helicopter did minor damage to the home, but the pilot and a passenger suffered minor injuries.

A surveying helicopter crashed on a residential street with single-family homes on one side and senior apartments on the other. The pilot and passenger were conscious and breathing and talking to the police. Considering photo evidence showing the severity of the crash, it was shocking that both of the people on board the helicopter survived the life-threatening event.

#BREAKING #UPDATE: @FresnoPolice tell me both the pilot and their passenger SURVIVED this crash, remarkably. Neighbors are still visibly shaken as they wait to get back in their homes. No ETA on when the neighborhood will reopen. @abc30 https://t.co/CkqwoMYUdI pic.twitter.com/HxyKKJMAgG

The crash also affected the neighboring residences. A senior complex’s residents couldn’t get to their apartments for an hour or two, and were escorted in by police officers. However, no one else nearby was injured by the helicopter crash.

For additional information on this story, please consider the news outlets listed below to stay in the know.