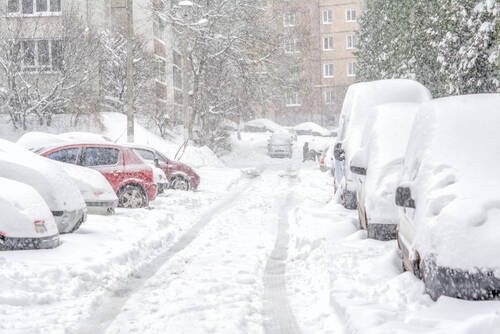 Christmas Eve was marked by record-breaking temperatures for 200 million Americans. The wild weather included blinding blizzards, freezing rain, and flooding due to a wild winter storm enveloping much of the country.

It is the largest storm in history, almost 2,000 miles wide, extending from the Great Lakes near Canada to the Rio Grande near Mexico.

The tiny town of Hell, Michigan, has officially frozen over after temperatures plunged to minus 50 degrees on Friday night. Meanwhile, Seattle’s streets have become like ice skating rinks, with cars and residents sliding across them.

Around two million Americans are without power due to the storm, which has downed power lines across the country. There have been more than 400,000 power outages in North Carolina alone, and rolling power cuts are expected on Christmas day as well. There have been at least 23 confirmed deaths so far amidst the dangerous weather.

There are piles of wrecked cars littering the highways after whiteout conditions caused fatal accidents.

There were nearly 10,000 delayed or canceled flights in the US on Christmas Eve, according to FlightAware. As a result, many travelers are now unable to make it home for the holidays, forcing them to sleep on airport floors overnight.

FedEx warned on its website that guaranteed delivery dates previously promised may not be met because of ‘substantial’ weather disruptions, particularly at hubs in Indianapolis and Memphis. As a result, many families may wake up on Christmas morning to find no presents. There is also a prediction of delays from Amazon.

Erie County, located in Western New York, is experiencing some of the most extreme weather conditions. Two people died in the area following medical emergencies because first responders could not reach them quickly, according to the Erie County Executive.