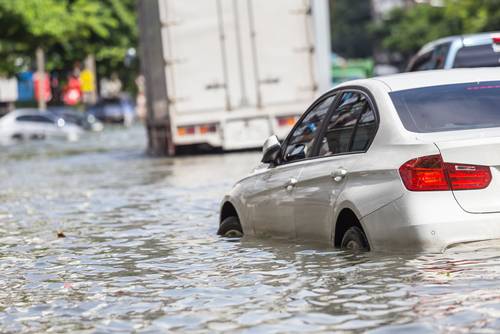 Over the past two days, parts of the east coast of Scotland have experienced record rainfall. Flooding has caused major road closures in Dundee and Edinburgh and travel disruptions to rail networks, metro lines, roads, and bus services.

People were forced to abandon their submerged cars as flood warnings were extended in Scotland. Schools were closed and rest centers were set up for those who were unable to return to their flooded homes.

Newcastle rail station was left with hundreds of people stranded after services were cancelled. Customers were told they may have to wait up to five hours to board.

Forecasters warned that 100ml of rain was expected to fall in parts of Scotland from Thursday until Friday evening, and that flooding was likely in the most severely hit areas. Weather experts have issued amber and yellow rain warnings for much of northeast Scotland and the Scottish east coast. In total, weather forecasters have issued 11 flood warnings and 81 flood alerts.

Scottish justice secretary Keith Brown convened a meeting of Holyrood’s resilience committee on Friday evening, amid warnings that some of the worst impacts could still be felt on Saturday.

Resident Andrew McIntosh, who suffers from a severe lung condition, said the floods had left him and his father stuck in their home with only partial power.

Yorkshire Water said reservoir levels were moving in the right direction as a result of this heavy rainfall. However, Environment Agency data shows they were still below the expected level for November.