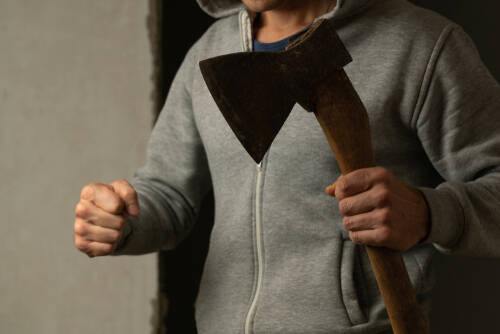 After attacking his wife with an axe, the former manager of the Dreamboys stripper group has been sentenced to 27 years in prison.

Alex Alam, 32, was attacked outside her home by David Richards, 42, after they ended their relationship. Her skull was fractured and her scalp and face were cut.

When Alam stepped outside her Stock home with her dogs, he waited for her in the dark and attacked her.

Alam said her life had been turned upside down by the person she chose to have children with. She elaborated on this in a victim impact statement read by prosecutor William Carter.

The statement read, “I have been utterly betrayed beyond belief.” She continued by saying, “the scars are a constant reminder of what he did to me.”

According to the judge, David Turner KC, the attack was a “bloodbath.” Alam was praised for attending the hearing “courageously.”

As details were read out in court, she wept and was consoled by people who were in court with her.

According to judge Turner, Richards stalked and monitored Alam before the incident. The attack occurred after Alam’s friend left the house.

For a brief period of time, Richards tied Alam up inside the house. However, Alam freed herself when her attacker went outside to look for her phone.

Despite her injuries, she managed to lock the doors and call for help. A police chase ensued after Richards attempted to flee.