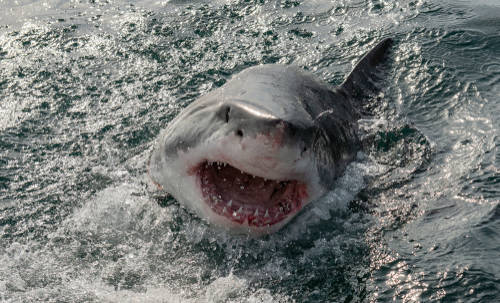 Long island has experienced 5 shark attacks in two short weeks on its beaches, leaving several people injured from the incidents.

A 41-year-old man was attacked by a sand tiger shark at Smith Point Beach in Long Island, New York. The man escaped by punching what he believed to be a four-foot-long sand tiger shark. Swimming was prohibited at the beach for more than five hours, but no sharks were ever spotted.

After punching the tiger shark, a wave broke beneath him that carried him to the shore. He escaped the attack with a bite injury on his calf from the shark.

A 49-year-old tourist was bitten by a shark while standing in waist-deep water on Fire Island Wednesday evening. He was able to walk out of the water and was flown to Stony Brook University Hospital with non-life-threatening injuries.

A lifeguard was bitten at Ocean Beach on July 7, and a swimmer suffered a cut foot at Jones Beach on June 30.

On Thursday, a shark was seen surfing at Robert Moses State Park on Fire Island and at Tobay Beach in Oyster Bay. There were no reported injuries.

Scientists say warming ocean temperatures and a resurgence of bunker fish are behind the increase in shark sightings off Long Island.

To learn more about this series of attacks, check out the news outlets listed below to stay in the know.