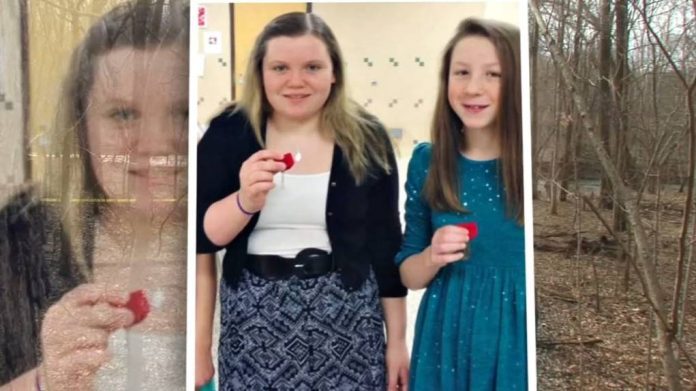 A 50-year-old man has been charged with the 2017 murders of two Indiana teenage girls, who were found dead after going for a hike on a local trail.

The girls went missing after being dropped off to go hiking near the “Monon High Bridge,” an abandoned railroad. Their grandfather said they talked all the time about safety, but not enough considering what happened next.

When the time came for them to be picked up, they could not be found. The two girls, 14-year-old Liberty German and 13-year-old Abigail Williams, were missing.

During the hike, they left social media evidence that showed their location. Liberty posted a photo to Snapchat of Abigail walking on the bridge alone.

The next day, the bodies of Liberty and Abigail were found off the shore of a local creek, a half mile upstream from the bridge they took a photo on.

Police have worked to find the girls’ killer for years. Prior to a recent arrest, they released two sketches of a suspect and grainy photos of a person walking on an old railroad bridge with audio of a male saying, “Down the hill.”

50-year-old Richard Allen has just been arrested and charged with the deaths of both girls. Abigail’s mother said Allen’s arrest didn’t bring any joy or relief. Regardless of the results of the investigation, her daughter was still gone.

Officials said Allen entered a preliminary not guilty plea and were not able to discuss the evidence in the probable cause or the charging information. They did not answer questions about how long Allen has been a suspect.

Indiana State Police Superintendent Doug Carter said it was emotional to break the news of the arrest to the victims’ families, but they will continue to work until there is nothing left to do.

Carter said limited details will be released to protect the integrity of the case and investigation, and that the probable cause affidavit and charging documents have been temporarily sealed.