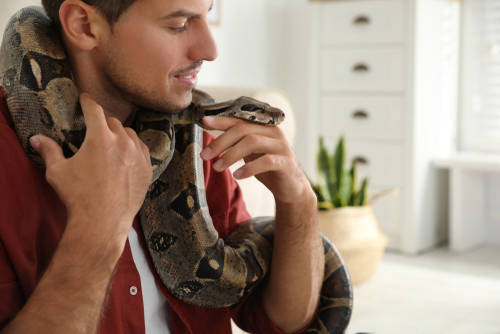 Elliot Senseman, of Upper Macungie Township, died on Sunday, the coroner’s office said. The cause of death was an accident. Officials claim that he died from anoxic brain injury due to asphyxiation by constriction.

Police were called to Senseman’s home in Fogelsville around 2:12 p.m. last Wednesday. They found him unresponsive with an 18-foot snake wrapped around his neck, and one of the responding officers was able to fatally shoot the snake without injuring the man.

When the pet was shot, the snake released. It slithered away, and the man was pulled to safety. It’s not clear why the snake turned on its owner.

Officers shot the snake in the head to release the man from the constriction of the enormous reptile. However, this didn’t prevent Senseman from experiencing life-threatening injuries as a result of his pet. He was in cardiac arrest at the time police arrived to help.

Police officers shot the snake wrapped around Senseman’s throat. Later on, investigators found several snake enclosures inside the home. Residents have said they have seen their neighbor holding snakes in his front yard, and have seen multiple snakes through the window.

For more information and updates on this story, consider the news outlets listed below.