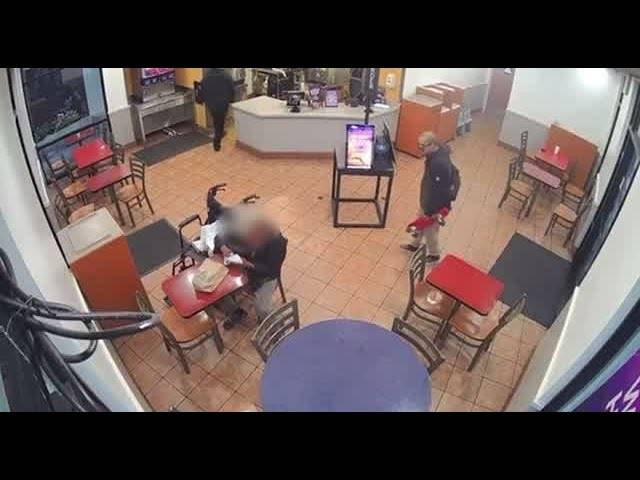 A suspect stabbed an 82-year-old man in a wheelchair at a Taco Bell in Mar Vista without provocation, police said. The suspect dropped a skateboard he was carrying before fleeing the restaurant.

The suspect is described as a male, between 5-foot-1 and 5-foot-6, and 130 pounds, with a large tattoo on the back of his head.

Surveillance footage at the Taco Bell restaurant captured the shocking, gruesome incident. Angles from the entrance door and the inside dining area can be seen in the released footage.

The footage captures the suspect walking into the Taco Bell, looking around the room as he enters. After he spots his target- the wheelchair-bound elderly man- he then looks around once more. He slowly approaches the victim from behind.

Completely unprovoked, the man stabbed the victim in the neck. The shock of the stabbing caused the elderly man to accidentally knock his tray of food over. When his victim turned around to confront the stabber, he quickly ran outside of the restaurant.

The suspect has not yet been identified. Because of this, the police department in Los Angeles has asked the public for help in naming this criminal so he can be held accountable for the assault.

For additional information on this story, please consider the news outlets below to stay in the know.