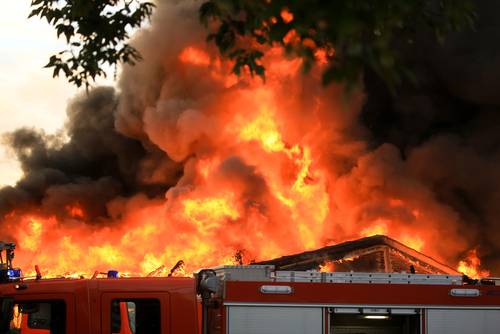 A Philadelphia man allegedly drove to his ex’s home and set it on fire. In the process of this criminal arson he killed her younger sister, who had cerebral palsy and relied on a wheelchair.

Two relatives and Drasher’s nurse were also inside the house, but managed to escape the blaze. Olivia Drasher, the younger sister, was no as fortunate in making it out of the burning building.

Aaron Clark, 30, was dating Amira Rogers while being coworkers at USPS. However, Rogers ended the relationship that they had. In his rage, Clark allegedly attempted to choke the woman at work.

The reason for their breakup was a pattern of aggressive behavior that alarmed Rogers. This behavior was only amplified after their ties were cut.

Clark’s ex-girlfriend filed a complaint against him with the Postal Inspection Service because of the choking incident that happened while they were working. This took place just one day before the deadly fire.

A fire broke out at Rogers’ house, and Clark was allegedly seen on surveillance footage walking away from her house soon after. Neighbors also recall seeing him arrive at and leave from the home at the same time as the fire.

Three people escaped the flames. However, Olivia Drasher died from smoke and soot inhalation, as well as thermal body burns.

The raging man’s behavior continued to take a desperate turn. Delaware County District Attorney Jack Stollsteimer said Clark continued to text his ex after his arrest. He accomplished this through an Apple Watch that he hid inside his rectum when he was taken into custody.

Amira Rogers has launched a GoFundMe to raise money for her now-homeless family after her baby sister Olivia died in the fire. Clark remains in custody and was reportedly denied bail.