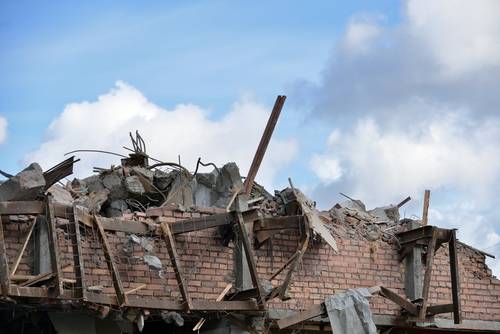 An explosion at a condo building injured at least 10 people Wednesday. Investigators are trying to pinpoint the cause.

Crews found a body in the rubble of a condo building that partially exploded in Gaithersburg, Maryland. The person hasn’t been identified, and a criminal investigation has been opened into the explosion.

A K9 alerted authorities to the explosion site, and crews pulled away at the massive debris pile piece by piece.

Investigators are focusing on a 911 call made around the time of the explosion, which led them to connect a person to a unit in the building that exploded. The call was from a woman who was panicked over her son’s suicidal threats. She claimed that she couldn’t reach her son before she alerted the authorities about the danger he posed to his own life.

Authorities said they were still unable to contact a potential resident of one of the condos, and are concerned for their family and any other people who may have been present.

Two people were physically shaken by the explosion, and maintenance workers rescued them using ladders before firefighters arrived. Some residents told first responders they had smelled gas earlier in the morning, but it was not yet known whether anyone had contacted Washington Gas, any other agencies or building management.

Washington Gas officials said they were aware of the incident and were responding to assist the fire department. They did not have further details to share.

Montgomery County Fire Rescue provided additional updates on what they did on site today, including having an accelerant detection canine on site. They also allowed residents to come back to the building with a fire rescue support escort to get critical belongings out of their structures.

Video and images from the scene showed a 50-to-75-foot field of debris and rubble after the blast leveled a portion of the garden-style building.