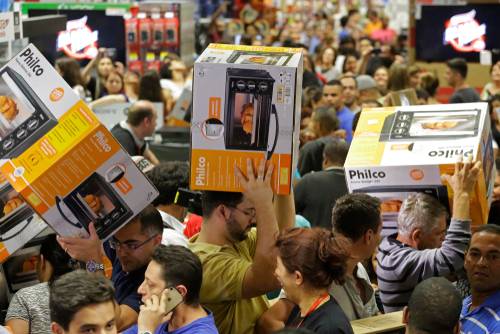 There’s nothing that makes a nice suburban mom turn into a vengeful pro wrestler quite like a good Black Friday deal.

Several fights broke out during Black Friday sales in 2018. Two women wrestled over pots and pans during the madness at a Walmart in Rockmart, Georgia. The thing was, there were plenty of boxes left for both women to choose from that were easily accessible on the shelves.

Other shoppers that were walking nearby were able to pluck their own box from the store’s shelf while the women tussled on the ground for the exact same product. One woman claiming she was reacting in defense despite witnesses nearby warning them to stop their antics.

However, some Black Friday fights resorted to even more extreme violence. A 18-year-old man opened fire on a crowd in a mall in Alabama, injuring two people. A 12-year-old girl was also shot during the commotion.

The shooting sparked horror and panic among bargain hunters who had flocked to the mall after Thanksgiving dinner. Mall staff tweeted that they were devastated by the incident, and that the shopping center would remain closed until further notice.

This kind of violence, however, has been a longstanding problem. Walmart agreed to pay nearly $2 million in 2008 to avoid criminal charges after a stampede of antsy shoppers shattered the sliding glass doors at a store and fatally trampled a worker. Since then, Walmart has worked with crowd management experts and local law enforcement to keep shoppers safe.

Black Friday has long been a cultural phenomenon, but now shoppers can find bargains well before and after Black Friday. Many deals are explicitly intended to draw spending away from the main event.

However, there’s also been a major increase in online shopping. Traditionally, Black Friday shoppers would wait on lawn chairs and in tents outside a Best Buy. But many consumers plan to skip in-person shopping this year and take advantage of free shipping deals.