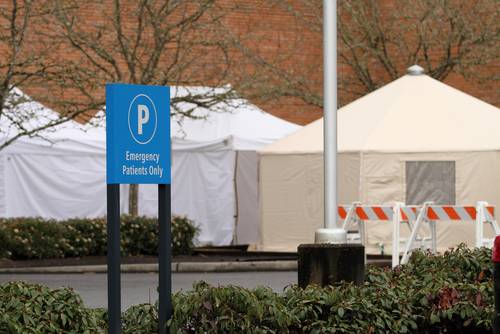 Several Southern California hospitals have put up overflow tents outside emergency rooms to cope with a rising number of patients with flu and other respiratory illnesses.

Health experts are warning people to use caution during the holidays, as flu cases are on the rise in Northern California. The flu season is getting off to a fast start, with more cases being reported than is typically expected at this time.

About 9 percent of emergency room patients in San Diego County had flu symptoms last week, up from 7 percent two weeks ago. Scripps Health’s chief medical officer of acute care operations and clinical excellence said the flu is just bouncing off other viruses.

San Diego County hospitals and doctor’s offices reported 1,695 positive flu tests since September 1, up 259 percent from 471 in the same, year-ago period. Experts are not sure if flu cases will reach an earlier-than-usual peak in California or if the season will continue through February or burn out earlier.

California is not the only state being hit by an increase in flue cases. The CDC reported that the flu and similar viral illnesses are notably high in Georgia, New York City, South Carolina, Tennessee, Texas and Washington, D.C.

The flu season has started early in the United States, but the COVID-19 pandemic has been trending downwards and leveling off in recent weeks. Health experts said it was not immediately clear whether flu cases would reach an earlier peak altogether, or whether these cases are merely an exception to the rule.

Health officials are also seeing early signs that a wave of another respiratory virus may be starting to wane. This pattern includes data that shows a decline in the Southeast, Southwest, and an area that includes Rocky Mountain states and the Dakotas.