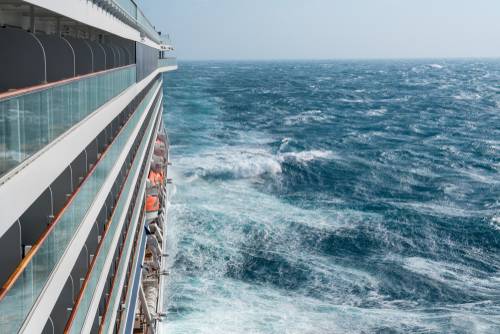 A guest passed away following the incident, and four other passengers were treated for “non-life-threatening injuries” by the ship’s onboard doctor and medical staff. The cruise line has notified the guest’s family.

The Viking Polaris was launched in 2022 and was handed over to Viking Cruises in September. It has since been used for Antarctic cruises. Due to the fatal incident, the expedition of the cruise ship was halted. The company is now arranging return travel for guests and crew.

A couple from North Carolina were onboard the Viking Polaris when it hit a rouge wave whipped up by an arctic storm. The ship suffered minor damage when the giant wave hit it sideways with full force.

Several windows were broken, but there was no danger that the ship would capsize. When the rogue wave hit the cruise ship, passengers didn’t know if they should get their gear ready for abandoning ship.

Scientists often use this term to describe extreme storm waves that seem to rise up out of nowhere. However, experts are still researching how these waves form.

Scientists have learned more about rogue waves, which surge out of nowhere and can look like a steep wall of water, up to twice the size of surrounding waves. This natural phenomena is called a rogue wave.

There are other incidents of these rogue waves causing fatalities on ships. Another extreme wave caused deaths and injuries to cruise ship passengers in 2010. However, modern cruise ships are built to withstand any major damage from such a phenomenon.

Tales of freak waves can be found throughout historical maritime folklore. Despite these tales, scientists have only accepted them as a real phenomenon in the last decades.