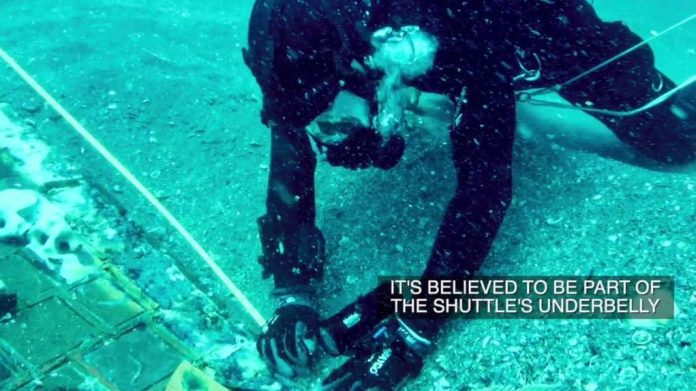 A History Channel documentary crew found a piece of the space shuttle Challenger in the Atlantic Ocean off the coast of Florida, decades after the shuttle exploded shortly after liftoff.

Underwater explorer Mike Barnette and wreck diver Jimmy Gadomski discovered a twenty-foot segment of the 1986 Space Shuttle Challenger in March while looking for the wreckage of a World War II plane. NASA verified the piece via video a few months ago.

The fragment is believed to be from the shuttle’s belly and is more than 15 feet by 15 feet. The families of all seven Challenger crew members have been notified.

NASA Administrator Bill Nelson said the discovery of a piece of Challenger gives people around the world “an opportunity to pause once again” and think about the lives lost in the tragedy.

The Challenger space shuttle exploded shortly after launch on Jan. 28, 1986, killing a schoolteacher and six others that were on board the spacecraft. By law, all space shuttle artifacts belong to the U.S. government. The fragment of the Challenger remains on the ocean floor off Cape Canaveral as NASA determines the next step. It was discovered buried beneath the sand at the bottom of the Atlantic.

Most of the recovered shuttle wreckage remains buried in abandoned missile silos at Cape Canaveral Space Force Station, except for a left-side shuttle panel on display at Kennedy Space Center’s visitor complex.

A piece of the ruined fuselage from the Challenger explosion was displayed at the Kennedy Space Center in 2015. The Challenger crew’s love of exploration is still inspiring the astronauts of today’s Artemis Generation, said NASA Director Janet Petro.

NASA’s 25th shuttle mission, which was the last Challenger shuttle launched, led to new risk assessment procedures and the creation of an Office of Safety and Mission Assurance.