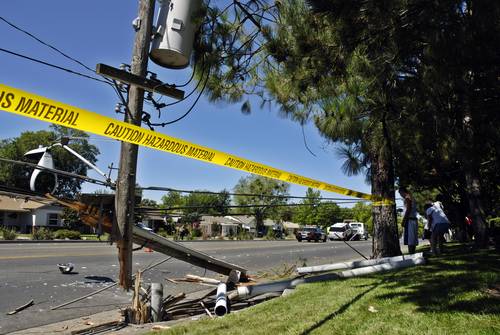 On Sunday, a small plane crashed into power lines near Montgomery County Airpark in Gaithersburg around 5:40 pm. The plane crash caused widespread power cuts in the surrounding county. Teams of rescue units arrived to find the aircraft suspended 100ft in the air, with the two occupants uninjured.

Goldstein said rescue officials had been in contact with the two occupants of the plane that were still dangling over the power lines. The firefighters were putting clamps and cables on the wires to ensure there was no static electricity or residual power. The aircraft’s passengers had to be brought down by special technical groups and a hazmat team.

The two occupants of the plane were finally removed from the dangling aircraft several hours later. One was removed around 12:25 am, and the next occupant exited the aircraft about 10 minutes later.

Officials responded to the crash scene in Montgomery County near Gaithersburg, where a single-engine Mooney M20J crashed. The cause of the crash wasn’t immediately clear. The FAA and National Transportation Safety Board will investigate to get a better understanding of what happened before the deadly crash.

Montgomery County Public Schools will remain closed on Monday due to a power outage. According to the utility company, Pepco, there were about 85,000-95,000 customers that didn’t have access to electricity.

Live wires on the scene of the power line plane crash posed a major threat to locals. Because of this, any residents in the area were cautioned to avoid the scene. Pepco said it had “de-energised” the lines so that the rescue could take place.