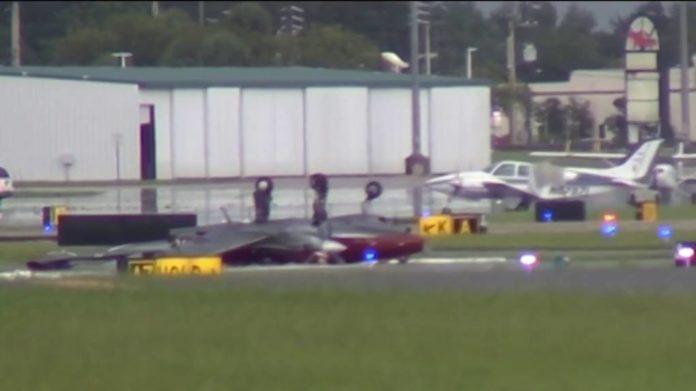 One person died and another was injured when a twin-engine aircraft flipped over while taxiing for departure during severe weather at Orlando Executive Airport. A twin-engine plane was occupied at the time of the crash, and a single-engine craft was parked nearby.

Both victims were sent to the hospital after a plane flipped over at the Orlando Executive Airport during severe weather Thursday, according to the Orlando Fire Department. Hangars and other structures at the airport were also damaged during the storms.

Witnesses said the plane flipped on the north side of hangar 11, causing other aircraft on the ground to collide with each other. The airport’s hangars suffered damage during the incident.

The storm moved in fast and was so severe with heavy gusts of wind that it actually flipped an airplane. Pilot Nick Hendershot said high winds can easily take a plane off the ground. He said planes are small, light and can be lifted off the ground by a lot of wind.

The Orlando fire and police departments responded to the incident, which included hail and winds up to 60 miles per hour. When they arrived at the scene, firefighters found one person dead and another person injured after the crash.

To learn more about this plane accident, please consider the news outlets listed below to stay in the know.