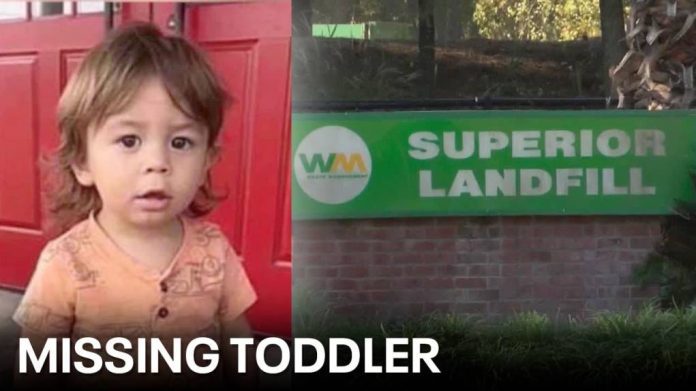 Police found partial remains of a human child in a landfill one month ago and are now conducting DNA analysis to confirm the remains are indeed those of a missing toddler. A final result is likely within days.

Leilani Simon, 22, reported her 20-month-old son missing from their Savannah, Georgia home on October 5. Police have ruled that the young boy, Quinton Simon, was murdered and his mother has recently been charged with the murder.

Leilani and her mother went to Sting Ray’s beach bar in Tybee Island two weeks after Quinton disappeared, where they drank Patron shots and pestered their server to drink with them. While they spent their time drinking leisurely, a photo was tweeted by their local police department showing a team of people searching a landfill for the little boy.

The woman’s nonchalant behavior since Quinton’s death has eerie hallmarks of Casey Anthony, who was found not guilty in 2011 after dancing in a bar four days after her daughter Caylee vanished.

Quinton’s mother had lost custody of him and his brother and was ordered to start paying child support when Quinton vanished. The toddler was in the legal custody of his grandmother, Billie Jo Simon, at the time of his disappearance.

On the day Quinton vanished, his mother claims that she woke up that morning to find the door open without any knowledge of her son’s whereabouts.

Billie Jo shared her theory on the case in a phone call with the child’s biological father, Henry ‘Bubba’ Moss. She said she felt like there was an accident while the child’s biological mother was high or blacked out. She told a local news station she has barricaded herself in her yard to hide from protesters who have left signs like ‘Baby Killer’ on a memorial she set up outside for her son.

Early on, Leilani Simon told police that her ex-lover Henry ‘Bubba’ Moss snatched her son Quinton from her Savannah home in the darkness of night. However, Henry told police he hadn’t been anywhere near Savannah and presented alibis and CCTV footage from the next-door gas station that proved he didn’t leave his home overnight.