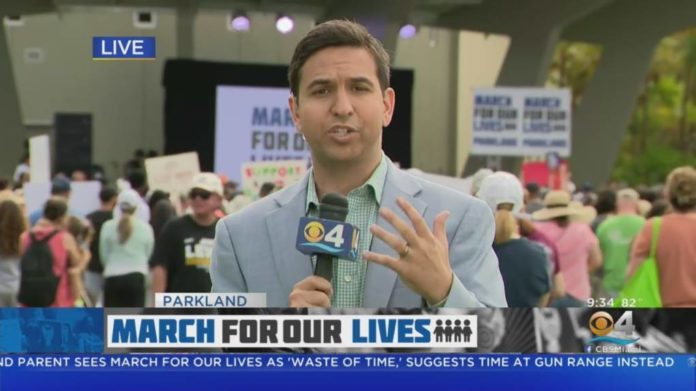 More than 1,000 people rallied in downtown Los Angeles on Saturday to protest gun violence. The rally was inspired by the 2018 shooting at Marjory Stoneman Douglas High School.

Students from UC Berkeley and across the country marched up 1st Street to protest gun violence and call for universal background checks, an increase in the age for legal gun possession from 18 to 21, and a ban on assault weapons and high-capacity ammunition magazines.

Nick Leeds, 26, who helped set up for the rally, saw a grownup holding a pair of shoes of one of the child victims and said something had to be done.

Erin Barker, 23, lost a family member in a drive-by shooting and had another relative who survived a mass shooting at Northern Illinois University in 2008. She said politicians are not listening and that stricter laws are needed.

Demonstrators called on political leaders to treat gun violence as a public health emergency and take steps to address it, including raising the age limit for purchasing a semiautomatic rifle from 18 to 21 and prohibiting the sale of ammunition magazines with a capacity of more than 15 rounds.

The recent Buffalo and Uvalde mass shootings have had devastating aftermath. The suspects in both shootings, both 18, legally purchased the semiautomatic weapons used in the attacks.

A Marjory Stoneman Douglas High School shooting survivor said that politicians have made promises that they would ban assault weapons, but that the shootings have only ramped up. He said it’s important to march to show how angry they are and that they won’t stop until their demands are met.

For more information on this protest, consider the following news outlets listed below: