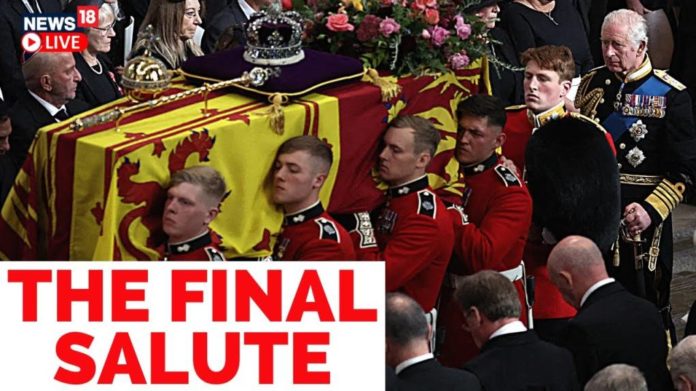 Queen Elizabeth’s closest relatives were ashen-faced throughout Monday’s solemn funeral rituals in London and Windsor, silently playing their parts in meticulously choreographed processions that nevertheless betrayed the high emotions of the day.

Charles looked distraught and exhausted as eight pall bearers carried his mother’s coffin through the abbey’s Great West Door for the service. William and Kate held their children between them as they walked the aisle.

The royals followed the coffin as it was carried out of the abbey and placed back on to the gun carriage, and then joined another solemn procession through the grand avenues of central London. William and Harry walked side-by-side behind their grandmother’s coffin.

The coffin of Queen Elizabeth was placed in a hearse and driven to Windsor Castle, where the queen’s final resting place is located. A public service was held at St George’s Chapel before a private family burial was held.

Queen Elizabeth II’s coffin arrived at Windsor Castle on Monday, and the Royal Standard was raised to indicate that her son, King Charles III, had arrived at the royal residence.

After the state funeral service, Big Ben is tolling for 96 minutes and guns are being fired in Hyde Park. The queen’s coffin will be followed in procession by King Charles III and Camilla, the Queen Consort, for 45 minutes to Wellington Arch, at Hyde Park Corner.

For additional information, listen to the news outlets below.