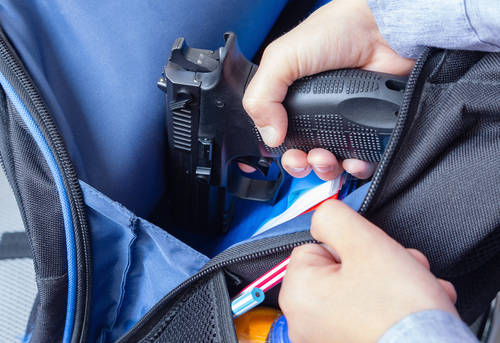 Police say a 19-year-old former student opened fire at a St. Louis high school, killing a teacher and a teenage girl and wounding six others before being killed by police in an exchange of gunfire.

Authorities didn’t name the victims, but the deceased teacher’s daughter spoke out. She said her mother loved children and was killed when the gunman burst into her classroom.

Seven security guards were stationed at an entrance of the locked building at the time of the attack, and one noticed the gunman trying to get in at a locked door, but couldn’t. The guard notified school officials, who contacted the police. The police were the ones who eventually shot and killed the gunman.

Gunshots erupted shortly after 9 a.m. local time (10 a.m. ET), and everyone went into “drill mode,” turning off lights, locking doors and huddling in corners so they couldn’t be seen. A woman announcing herself as police finally arrived and engaged the shooter on the third floor. Witnesses of the school shooter were shaken up by the tragic incident.

Student Taniya Gholston, 16, said she was saved when the shooter’s gun jammed as he entered her classroom. Staff member Ashley Rench was teaching advanced algebra to sophomores when she heard a loud bang and saw the shooter try to enter the locked classroom before giving up and going away.

Teacher Raymond Parks was instructing a dance class for juniors when a man dressed in black approached and pointed a gun at him. The shooter pointed the gun away from Parks and let Parks and the dozen or so students leave the room.

Parent Janay Douglas said her 15-year-old daughter heard shots and took off running after one of her friends was shot.

During a news conference at the White House, press secretary Karine Jean-Pierre demanded that Congress take action and pass an assault weapons ban. Monday’s shooting was the 41st school shooting this year, according to Education Week, which also tracked the killings at Robb Elementary School in Uvalde, Texas, in May.