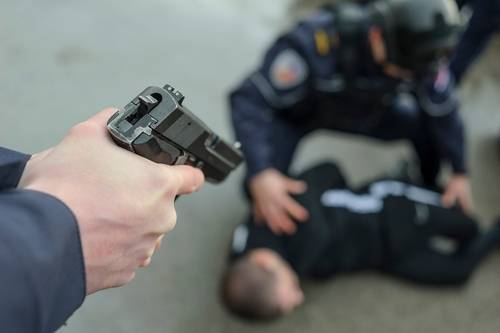 At about 7:30 p.m., Phoenix police received a call from a woman saying her adult son had left the house with several weapons. During the call, she also mentioned that she heard a shot. According to his mother, the suspect was experiencing a psychiatric break. This elevated her concern over her son’s behavior.

Officers tracked Manning down to the parking lot of a 7-Eleven and chased him, yelling at him to stop and telling customers to get out of the way. However, he ignored the shouting of the officers and continued walking towards an occupied convenience store.

The surveillance footage began with a customer that checked out at the counter. Manning walked in, and one officer began firing at the store. At least eight gunshots were heard on the body cam in total. Manning fell to the ground, and he was shot several times during the gunfire.

Clips of the surveillance footage can be viewed by watching the video below:

After the shooting exchanged ceased, Manning was transported to a hospital to receive treatment for his injuries. In addition to his hospitalization, the suspect was booked into jail. The suspect survived his gunshot wounds from his police encounter, and has since been arrested on weapons charges.

Surveillance footage also shows how nearby witnesses reacted to the incident. Witnesses Robert Castiglia and his fiance were just driving up to the store when police began swarming the scene. It was in that moment that gunshots started going off, and the two were seen on surveillance running outside the store.