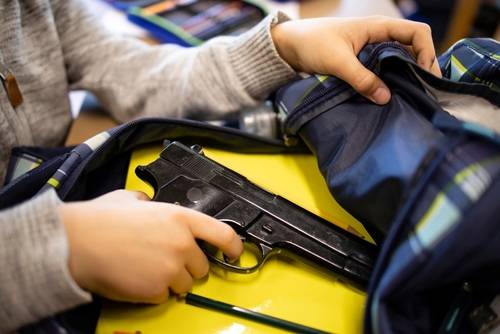 A 15-year-old boy shot and killed four classmates at Oxford High School Tuesday. He pleaded not guilty to various terrorism and murder charges and was ordered to remain behind bars without bond.

Investigators have found a video Ethan Crumbley recorded on his cell phone the night before the crime, as well as a journal in his backpack.

Crumbley faces charges including terrorism causing death, first-degree murder, assault with intent to murder, and 12 counts of possessing a firearm in the commission of a felony.

Authorities revealed Wednesday that Crumbley had exhibited “concerning” behavior in days leading up to the shooting rampage. They filed adult charges against him.

Authorities are still trying to determine a motive for the shooting, but say Crumbley had been meeting with school officials about his behavior in the classroom the day before the shooting. Crumbley then shot and killed at least 30 people in the hallway and classrooms.

Seven other people were injured, including a teacher. Four of them have been released from the hospital, but one girl remains in critical condition.

Investigators have recovered 30 shell casings from inside the school, and the suspect still had 11 unspent bullets in his magazine, Bouchard said. The quick actions of the school and the deputies saved lives, he added.

Authorities say the suspected shooter’s father bought the gun and three magazines just days earlier. The suspect posted pictures of the gun and a target on social media.

Michigan Gov. Gretchen Whitmer offered support to parents of the Oxford students and called gun violence a “public health crisis” that Americans must unite to solve. The Oakland Schools Intermediate School District said it was aware of new social media posts claiming a copycat shooting could be planned for other local schools.

Families of the victims have recently been taking the difficult steps of planning funerals, including the grandmother of 17-year-old Madisyn Baldwin, whose family had searched for her on foot outside the school before learning she had died inside.