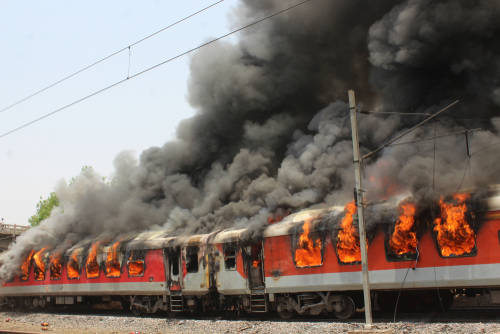 A packed Orange Line train transporting commuters on a bridge that runs over the Mystic River in Somerville caught fire on Thursday morning, sending hundreds of people scrambling for safety. A woman jumped into the river to escape the fire.

John Gosselin, who was staying at the nearby Encore Boston Harbor, saw the fire from his hotel window and said the train went up in flames quickly.

Passengers said the train stopped right past Wellington on the bridge, and there were billows of smoke. The train was evacuated and brought back to Wellington car house, where MBTA officials could be seen inspecting a charred area of the head car.

The Federal Transit Administration and the National Transportation Safety Board were notified, and Boston Mayor Michelle Wu vowed to transform the “broken” transit agency.

Officials believe four windows were removed from the lead train car during the fire to allow riders to evacuate. They say the train had last been inspected on June 23, and the sill in question had been inspected as part of that inspection.

To watch footage from this crazy incident, check out the news outlets listed below.