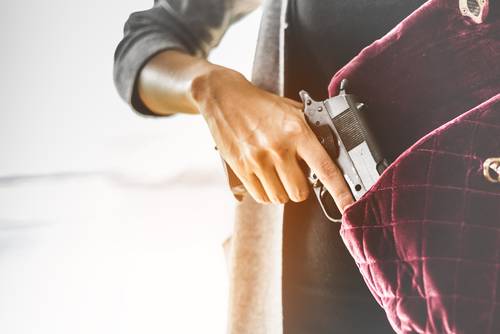 A retired Baltimore police officer was hospitalized after being shot by his wife. He remains in police custody while he awaits trial on multiple sexual abuse charges.

Shanteari Weems, 50, shot her retired police officer husband, James Weems, Jr., 57, in July after she confronted him about sexual abuse allegations made against him by the parents of three children who attended her Lil’ Kidz Kastle Daycare Center in Owings Mills, Md.

The parents of the children that her husband had molested confronted her at a very emotional, momentary, shocking moment. Shanteari Weems was the owner of the daycare that those children attended. She felt extreme remorse over the fact that those kids were violated under her watch.

The woman claimed that she shot her husband in self-defense. She stated that he became aggressive after she brought up the sex crime allegations.

Investigators began to take over the scene of the shooting to find out more information. After the altercation, two guns were recovered from the room, along with a notebook. Police found handwritten notes in the notebook that prove premeditation.

In the notebook, Shanteari reportedly wrote that she wanted to “paralyze” James, not kill him. She wrote that her intention was to prevent any more children from being the target of his predatory behavior.

Authorities are now working to interview more than 90 children who attended that daycare. The first allegation of sexual misconduct was made on July 3, and three victims in total came forward with disturbing stories of their interactions with James Weems.

James was charged with over 30 counts of child sexual abuse and assault. He is being held without bond.

Shanteari also faced charges of her own. She recently pleaded guilty to aggravated assault and carrying a pistol without being properly licensed.