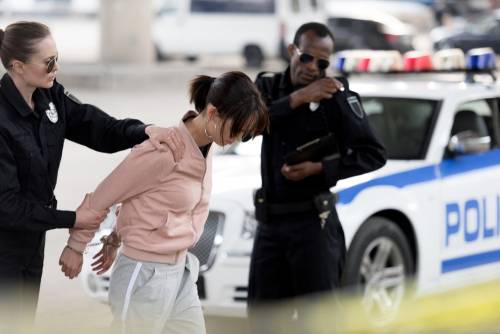 Hend Bustami, 28, was arrested on suspicion of killing her mother, Afaf Hussanen, 62, in their home at 10190 June Flower Drive.

Police found Bustami driving near Barstow, California, and spoke with her about stabbing her mother with glass shards. A license plate reader caught Bustami’s car driving south on Interstate 15, and the California Highway Patrol pulled her over near Barstow. It was then that Hend admitted to killing her mother, and there were obvious blood stains on her clothing during her admission.

Metro officers found Hussanen dead in the master bedroom and determined that a peculiar phone call that had reached 911 dispatch was connected to Bustami. In this call, a woman’s voice had admitted to the dispatcher, “I think I killed my mommy.”

Hend Bustami was interviewed by Metro detectives after she was picked up by the California Highway Patrol. She told them she had stabbed her mother several times and cut her throat.

The suspect was held Monday on a fugitive of justice charge related to the murder. A court appearance was scheduled for Tuesday.

Hend Bustami also has a criminal record of previous arrests. In August, police arrested Bustami for skipping out on a restaurant tab and violating airport rules at Harry Reid International Airport. They later learned Bustami had a warrant out of Las Vegas Municipal Court for battery against a security guard in June.

Bustami was ordered to be released pending trial on Sept. 2 and a bench warrant was issued on Sept. 27. Las Vegas Metro police received 12 calls for service at Bustami’s home in 2022 alone, including a report of a missing person, civil matters, and a suicide attempt.