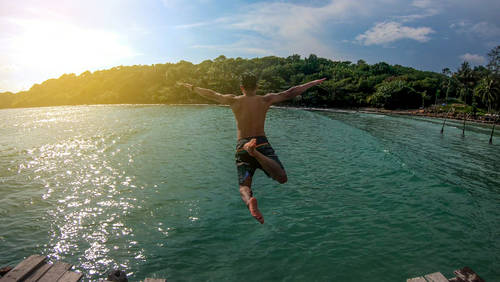 Police received a call around 11 p.m. Sunday reporting that a group of swimmers had jumped off the bridge. However, during their swim there was a life-threatening complication.

The caller began alerting police to “swimmers in distress.” One of the men was found at early the following morning around 6:20 a.m. The search radius for the two missing swimmers included all of Sengekontacket Pond and stretched several miles offshore.

The 26-year-old swimmer was the first to be pulled from the water, and he was found dead. A search for his missing 21-year-old brother continued throughout the day. However, the search was suspended “pending further developments” around 3 p.m.

#Update: The @USCG has suspended the search, pending further developments, for the missing swimmer in the vicinity of Jaws Bridge. #SAR #MarthasVineyard

Massachusetts State Police said that a marine unit and dive team were continuing to conduct search operations on the ocean side of the bridge. A Coast Guard cutter will also remain offshore until later this afternoon or evening.

This is not the first life-threatening incident to occur near the infamous bridge featured in the ‘Jaws’ movie. A man jumped off the American Legion Memorial Bridge last summer, suffering a serious neck injury. Rescue teams had been previously spotted conducting emergency safety training in the water near the bridge to be prepared for future incidents.