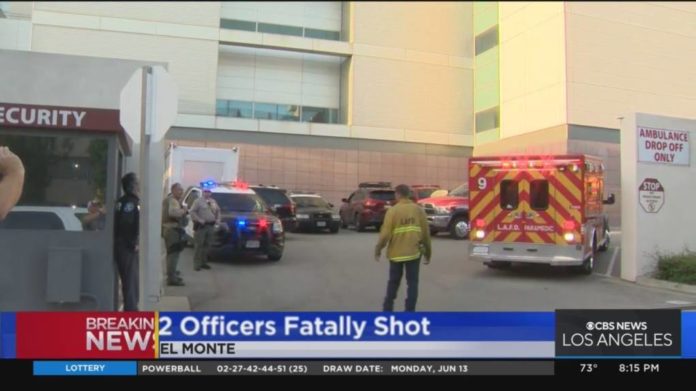 Two El Monte police officers were shot and killed Tuesday afternoon while responding to a possible stabbing at a motel. The suspect was pronounced dead at the scene, and twenty investigators were searching for surveillance video and interviewing witnesses.

El Monte Police Department acting chief Ben Lowry called the officers “good men” who paid the ultimate sacrifice. He asked the community to keep the officers’ families in their prayers.

Mayra Lomeli, 49, heard three shots and ran to close the entrance door, fearing a gunman would try to burst through.

Lomeli said she heard gunshots around 4:30 p.m. She said the police closed off the Santa Anita Avenue exit of the 10 Freeway and Garvey Avenue between Doreen Avenue and Merced Avenue.

Most of Garvey Avenue between Santa Anita and Merced avenues was devoid of activity by 6 p.m. Police directed traffic and nonlocal pedestrians down side streets, and barred visitors from parking at local stores.

A suspect was arrested after a manhunt that stretched into Tuesday morning in connection with a shooting that wounded a California Highway Patrol officer.

According to the National Law Enforcement Officers Memorial Fund’s Fatalities Report, 62 firearms-related officer deaths were reported in 2021, a 38% increase over the 45 officers killed in similar incidents in 2020.

The L.A. County District Attorney’s Office extended its condolences to the families of the two police officers killed on duty.