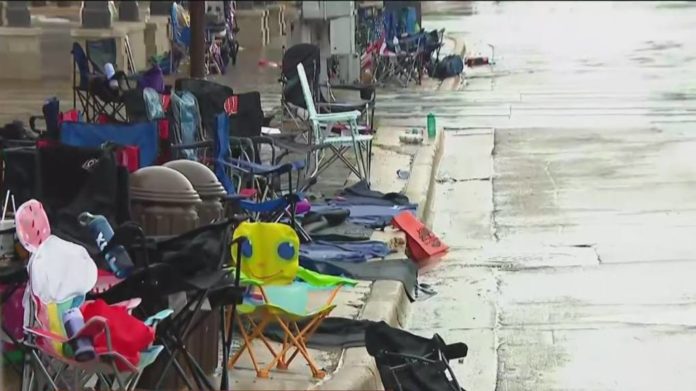 Five people were killed and 16 others wounded when a gunman started shooting 10 minutes after the Highland Park Fourth of July parade kicked off Monday morning, authorities said. Several witnesses said they heard multiple shots fired and several people were left wounded and bloodied.

Adrienne Drell, a former Sun-Times reporter, said she saw the Highland Park High School marching band start to run and heard them shouting for people to go to Sunset Foods. “Everyone is just stunned beyond belief,” Drell said.

Alexander Sandoval, 39, sat on a bench and cried, saying he and his family ran after hearing the gunfire, afraid for their lives. He said he saw bodies in pools of blood on the ground, and his partner and stepdaughter, safe, inside a McDonald’s nearby.

At least one adult victim died at the scene and several others were injured. Their conditions ranged from serious to critical.

Residents within a mile radius were told to shelter in place as authorities investigated. Dozens of fired bullets sent hundreds of parade-goers running for their lives.

Illinois Gov. J.B. Pritzker said he was furious that a celebration of America was ripped apart by a gunman who hid on a roof and shot innocent people with an assault rifle.

The Lake County Coroner said five people were killed at the parade, and a sixth victim died at a hospital. The hospital received 26 patients, and 19 were treated and discharged.

For more information on this story, check out the following news outlets listed below.