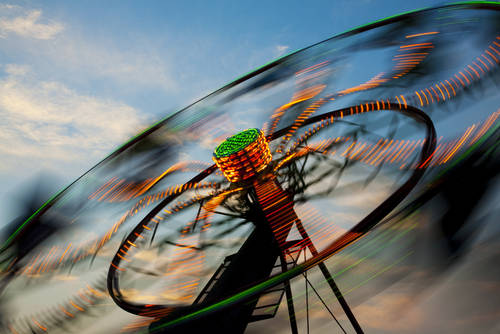 The Kentucky State Fair transforms into a frenzy on Saturday night. A family wants to remain anonymous says they saw the chaos unfold in real time.

The couple says they were in line for a ride when they heard a gunshot and saw 12 state troopers chase a man with what they thought was a handgun. They say they made it to their car safely without any injuries.

Nine people have been arrested in connection with the incident that caused the Kentucky State Fair to close early on Saturday night. Three adults and six minors were arrested for their behavior.

The group is now facing charges that include disorderly conduct, menacing, possession of stolen property and possession of a handgun.

Nine people have been arrested in connection with the incident that caused the Kentucky State Fair to close early Saturday night. Police say the incident was caused by a group of people using noise-making devices.

The Kentucky State Fair released a statement on Sunday afternoon regarding the incident that occurred Saturday night, causing the fair to close early. No one was injured in the incident.

The suspects also attempted resisting arrest and fleeing from police, which only added to their long list of charges.