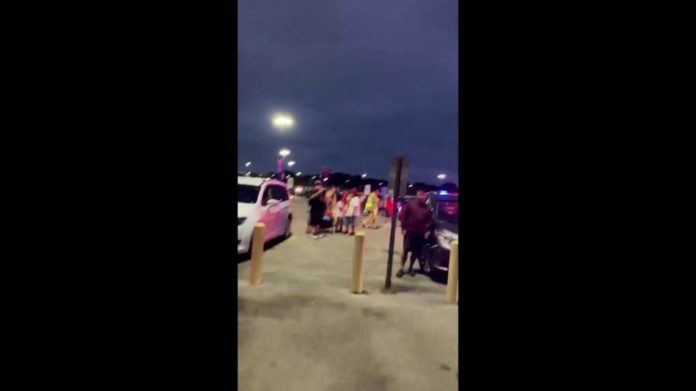 Bystander Brian Donda was on the phone with his son Charlie when gunfire erupted in the parking lot of Six Flags Great America.

Police say three people were injured when a car drove into the Six Flags parking lot and started shooting. The suspects got back in the car and sped off, leaving a 17-year-old boy and a 19-year-old woman injured.

The shooting was not a random act, and appeared to be a targeted incident, according to Gurnee police.

People were running around the park screaming and looking for their kids when the police arrived. After the shooting, many visitors sought shelter inside the park, hiding in buildings and other out-of-the-way areas.

Police began clearing the park after some time. A police truck drove around the perimeter saying it was safe to come out.

Six Flags said there are cameras inside the park and in the parking lot, officers patrolling the property, and advanced screening technology. When the shooting occurred, officers and security guards responded right away.

Six Flags released a statement about the park opening again by Monday.

Footage was released of people fleeing the amusement park after the shooting began.

To learn more about this incident, please consider the news outlets listed below to stay in the know.