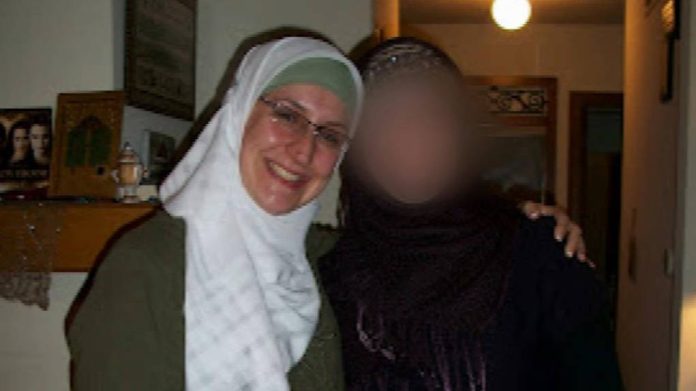 Allison Fluke-Ekren, 42, pleaded guilty to conspiring to support the Islamic State of Iraq and Al-Sham. She led an all-female Islamic State group military battalion and trained women and children to use AK-47 assault rifles.

Allison Fluke-Ekren brainwashed her children and trained them to kill, prosecutors said. She physically, psychologically, emotionally and sexually abused them as children. Based on his childhood that he spent with her, Fluke-Ekren’s son says she’s a ‘monster.’

Fluke-Ekren grew up on a farm in Overbrook, Kansas, and was married at 16. She tormented her brother during their youth, and tried to drown him in an icy lake, according to court documents.

Her son, who was not named in court documents, said his mother choked him to unconsciousness, locked him in tight spaces until he defecated on himself and poured salt or chemicals into his wounds. Her daughter said she was slapped so hard by her mother as a child that her muscles would cramp in agony.

Fluke-Ekren’s lawyers said they didn’t have the time or resources to counter the allegations, but argued they would have to subpoena medical records from Kansas, Indiana and Egypt, and interview witnesses in the Middle East.

Fluke-Ekren moved to the Middle East with her second husband and six children after graduating from college and graduate school in the U.S. She eventually fled the U.S. to avoid repaying student loans.

After the Sept. 11, 2012, attack in Libya on U.S. government offices in Benghazi, Ekren claimed she helped him summarize documents and an electronic device. Fluke-Ekren told a witness she wanted to bomb a U.S. shopping mall and college, but the attacks never happened.

After Doe’s death, Fluke-Ekren abandoned the terror group and devoted herself to raising her children. She married her fifth husband, a Syrian who was not a member of the terror group.

After leaving ISIS, she worked for a nongovernmental organization and taught at a school for about 50 children. She was arrested and held for seven months before being transferred to the U.S.