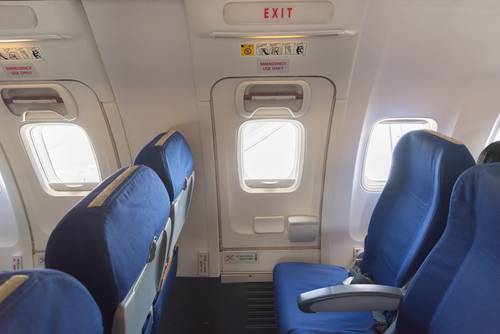 The FBI said a woman forced a Southwest Airlines plane to make an emergency landing in Little Rock, Arkansas on Saturday. She attempted to do something extremely dangerous while the passengers and crew were thousands of feet in the air.

Southwest Flight 192 was forced to make an emergency landing at Bill and Hillary Clinton National Airport in Little Rock, Arkansas, on Saturday. A passenger attacked a flight attendant and another passenger that was seated next to her.

Elom Agbegninou, 34, started staring at the exit door of the Southwest plane. She then forced her way past one flight attendant so that she could pull the handle of the exit door.

The woman bit a fellow passenger on the leg who tried to stop her from pulling the aircraft emergency door open at 37,000 feet. She wouldn’t release her bite of the fellow passenger’s thigh.

She started whacking her head on the plane floor and talking in a crazed manner, making disturbing claims that Jesus was the one who told her to take the flight and open the emergency door.

The woman who caused this commotion told authorities that she was traveling alone to Maryland to stay with a family friend that had a pastoral background. She said that could not breathe on the plane, which prompted her to get up from her seat in the first place.

She claims that her anxiety on the flight spiraled severely enough to make her want to open the emergency door as a form of relief. Footage of the incident shows that her appearance was out of sorts and that she had no luggage with her on the flight.

Southwest passenger arrested after she tried to open plane door mid-flight… she claimed “Jesus told her” to do it‼️🤯 pic.twitter.com/jRHmLGBTBt

The crew declared an emergency due to a passenger disturbance, and the plane was met by both Transportation Security Administration officers and local law enforcement.

The victim who was bitten by the manic woman received treatment at a local hospital and has since experienced PTSD and anxiety.