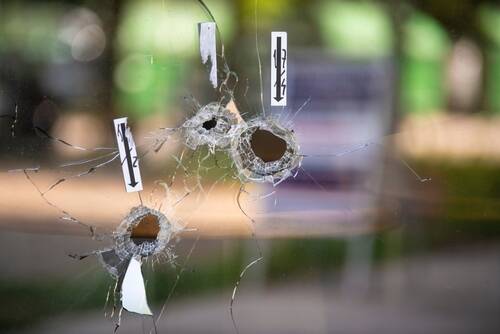 An armed robber was fatally shot by a customer at a Houston restaurant when he demanded money from other patrons, authorities said.

A shooting took place inside Ranchito Taqueria around 11:30 p.m.

An armed suspect entered the front door Thursday and pointed a gun at customers, demanding their wallets and money, the Houston Police Department reported.

During the incident, terrified customers hid beneath tables as a robber, dressed in all black, marched around and grabbed their belongings.

Videos show a patron standing up and firing a handgun at the suspect as he heads to the door. Before the robber collapses, the customer shoots him four times in the back.

Standing over the robber, the customer shoots him one last time at point-blank range, the video shows.

After collecting the stolen money from the suspect, the customer returned it to other patrons before fleeing the restaurant with the others. Police said paramedics declared the robbery suspect, believed to be in his 20s, dead at the scene.

Now, investigators are seeking to speak with the shooter about his role in the shooting, and they are asking the public to help identify him. Currently, no charges have been filed against him.

The customer is believed to have acted in self defense, but police are still investigating the incident further. The police obtained surveillance footage that shows the shooter getting into his pickup truck, described as a 1970s and 1980s model without a bed, and driving off.