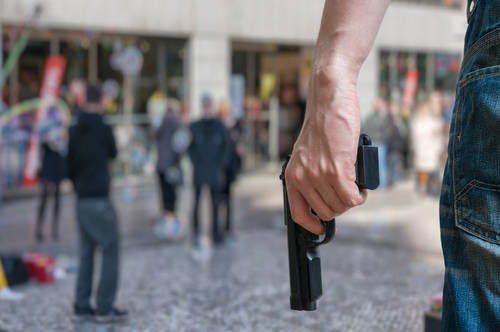 Police say that a suspect was taken into custody after a manhunt following a string of fatal shootings on Sunday morning.

Four people were shot Sunday morning along Seven Mile on Detroit’s west side, three fatally. A manhunt was underway for the suspect, and police could not confirm an arrest was made.

Police said that one of the victims was a woman in her 40s. The suspect was looking inside several cars when the victim confronted him.

Detroit Mayor Mike Duggan urged anyone with information about the shootings to contact police. Police warned the public to remain indoors and to call 911 if they see the suspect.

A 40-year-old woman was shot dead while waiting for a bus, and another man was shot while telling a suspect to get away.

Megan Owens said she heard about a dozen shots and thought they were fireworks. An older man walking his dog was bleeding from a wound and was taken to the hospital.

The suspect did not rob or attempt to rob any of the victims, and the same gun was used in all four shootings.

Detroit Mayor Mike Duggan pleaded for the public’s help in catching the suspect. He said anyone who comes in contact with the suspect should not attempt to approach him.