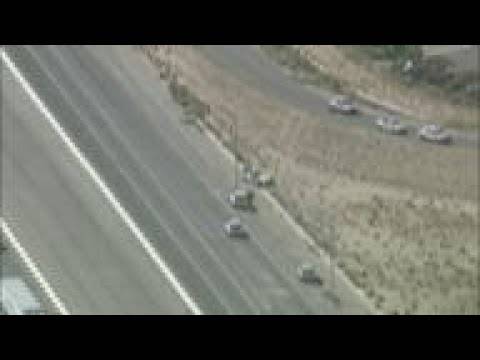 Police say Anthony Graziano shot his estranged wife and fled with his 15-year-old daughter, Savannah. A vehicle chase ended in gunfire, and Graziano was killed, as well as a passenger who ran toward the officers.

A 911 caller reported seeing the suspect’s Nissan Frontier around Barstow on Tuesday, and deputies chased the truck for around 45 miles (70 kilometers). The suspect shot several rounds through a patrol car’s windshield and later disabled a second pursuing vehicle, and a firefight ensued.

The sheriff said the investigation is in its earliest stages and that the 15-year-old girl “may have also been involved in some of the fire exchange.” One deputy was injured by shrapnel.

On Tuesday about 10:25 a.m., deputies chased Graziano’s truck eastbound on Highway 58 and southbound on Interstate 15 toward Victorville, where Graziano shot and killed a person wearing tactical gear. The person was transported to a nearby hospital, where she was pronounced dead.

Dicus said the passenger may have fired back at the deputies, but both Graziano and Savannah are dead.

For additional information on this story, check out the news outlets listed below to stay in the know.