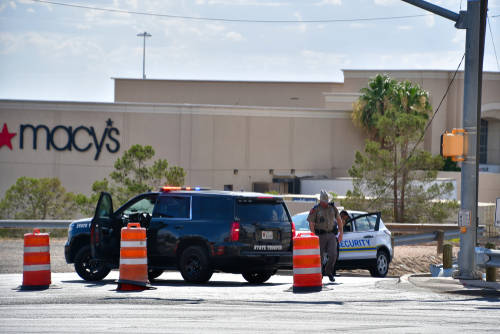 A man with a rifle and several magazines of ammunition entered the mall’s food court and started firing in the food court area. Police say five people were shot, three of them dead and two injured. The youngest victim was 12 years old and was taken to a hospital with a minor wound.

Mayor Mark Myers said the public should stay away from the area and that the Police Department was in control of the scene.

A 22-year-old man who was lawfully carrying a gun stopped the gunman after observing the shooting in progress. He shot and killed the shooter in defense. The mayor of Greenwood praised the man’s actions for intervening in a crisis.

The Greenwood Park Mall is located near Indianapolis near the intersection of U.S. 31 North and County Line Road. It has more than 130 stores and restaurants.

Chris Roy, assistant manager of the mall’s Van’s shoe store, saw people running through the hallway just before closing. He gathered his associates and other managers at the back door and waited for police to come clear them.

James Arthur was in the mall with his wife and four children when 20 rounds were fired. He said people started running and his family was separated.

The police chief had said that a bomb squad would examine a suspicious backpack, but late Sunday he said that they had not found an explosive device and had cleared the backpack.

For more details on this shooting, check out the news outlets listed below.