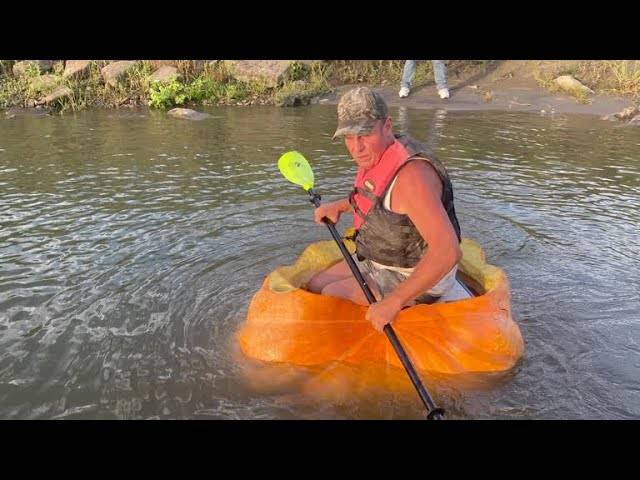 Duane Hansen celebrated his 60th birthday by paddling down the Missouri River in an 846-pound pumpkin named Berta. He is likely to set a new world record for “longest journey by pumpkin boat”.

The Nebraska power plant worker floated 38 miles down the Missouri River in an 846-pound pumpkin in an attempt to break the Guinness World Record for longest paddle.

Morgan Buchholz told News Channel Nebraska that her dad had always said she could do anything she wanted. Hansen said he had been dreaming about this for five years and that he was thankful that he didn’t capsize on one of the river’s many hazards.

Hansen had to traverse rocky shores and shallow sand bars while on board the “S.S. Berta”, and he assured his wife that he was done with gourd-steering.

Hansen said he got the idea to capture the world record after he attended a pumpkin growing seminar in Oregon. He grew an Atlantic Giant pumpkin for five years before he could achieve his goal of capturing the world record for largest pumpkin.

Hansen, who pushes coal for the Omaha Public Power District, launched his boat from the public docks at 7:30 a.m. and arrived at Nebraska City at 6:30 p.m. His wife named the boat Berta after the “Two and a Half Men” character.