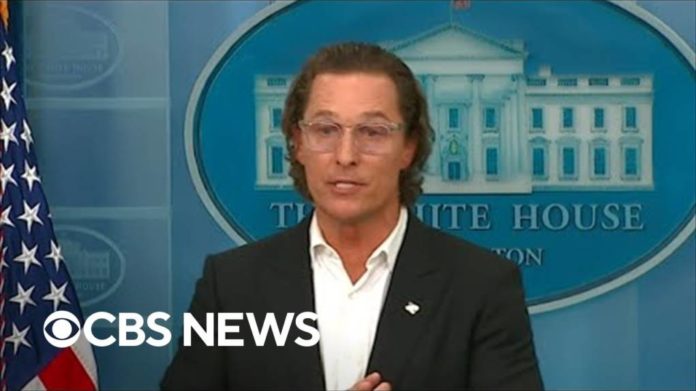 Matthew McConaughey said gun laws should be changed and argued that “people in power have failed to act” after 19 students and two teachers were killed by an 18-year-old shooter at a Texas school.

McConaughey said he supports new legislation for more gun control after the school shooting in his hometown that left 19 children and 2 adults dead. He said elected officials “on both sides of the aisle” should speak with each other to find solutions.

The actor called for background checks for all gun purchases, a waiting period for purchase and nationwide “red flag” laws.

McConaughey shared tragic stories of victims after meeting with families who lost loved ones at Robb Elementary. He recalled Ryan Ramirez’s father saying that he would remain strong for his family.

The Uvalde native told reporters that despite perceptions that gun reform has divided the country, there is actually agreement on a set of reasonable measures. He said that the country should start by making the loss of these lives matter.

McConaughey urged both sides to see above the political problem at hand and make choices that will make the American dream not an illusion for the next generation. He said that we must choose between protecting our party and protecting our country.

A bipartisan group of senators is working on a package of proposals to address gun violence, but the Senate needs 60 votes to pass legislation.

To see live footage of the interview, check out the video below.

For more details on this press briefing, check out the following news outlets listed below.