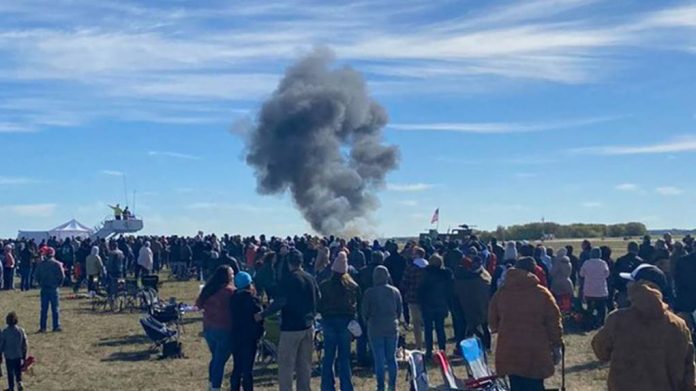 On Saturday, a historic World War II heavy bomber and fighter plane were involved in a midair collision in Dallas. Commemorative Air Force said all six people onboard the two planes “are feared to be dead” following the incident.

A Boeing B-17 Flying Fortress and a Bell P-63 Kingcobra collided mid-air near the Dallas Executive Airport, setting off a large ball of fire and smoke.

The Allied Pilots Association, which represents American Airlines pilots, said two of its former members were among those who died in the collision at the Wings Over Dallas Airshow on Saturday. The Federal Aviation Administration said it will investigate the crash.

The B-17 bomber was a cornerstone of U.S. air power during World War II, and only a handful remain today.

CAF President Hank Coates said the B-17 normally flies with a crew of four or five, and the P-63 is a single-seat fighter. He said the maneuvers the planes were going through were not dynamic at all.

Arthur Alan Wolk, a Philadelphia aviation attorney, told The Associated Press that the P-63 pilot violated the basic rule of formation flying by going belly up to the leader. Wolk added that it takes extensive training and discipline to fly in an air show setting.

Several videos posted on social media showed a fighter plane appearing to fly into a bomber, causing them to crash to the ground and setting off a large ball of fire and smoke.

Emergency crews raced to the crash scene at the Dallas Executive Airport, where no reported injuries were reported among people on the ground.

Texas Governor Greg Abbott also commented on the incident, referring to it as a tragedy.

Wings Over Dallas bill itself as “America’s Premier World War II Airshow” and featured more than 40 World War II-era aircraft. However, there have been safety concerns about these kinds of air shows for years.

Particularly, there are concerns with the use of older military aircraft. In 2011, 11 people were killed in a P-51 Mustang crash.